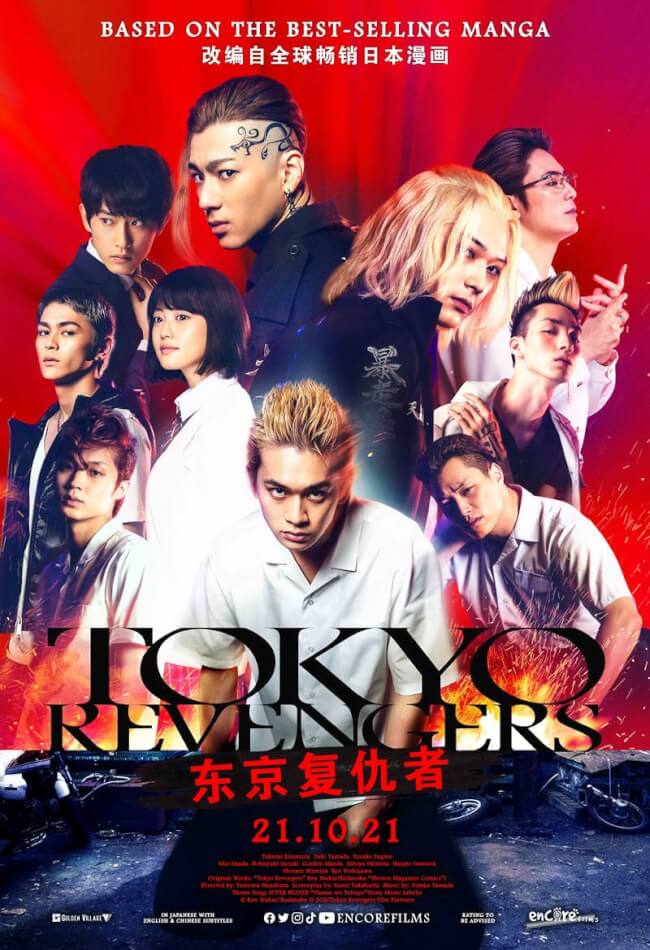 Adapted from best-selling manga and popular anime series. No. 1 movie in Japan!

A sniffling loser beaten down by life ﬁnds his inner hero to retake his future!

Since the very first appearance of the manga series (selling over 25 million copies) on Weekly Shonen Magazine, "Tokyo Revengers" has inspired and captured the hearts of readers from teens to twenties with its amazing characters, depiction of the protagonist, Takemichi's personal growth achieved by traveling through time, the strong bond of friendship and many inspirational quotes. Now this is all coming to the big screen as a live-action adaptation, featuring some of the most trending and talented actors!

This is my life’s revenge!

A down-and-out youth stands up to power to save the only girl he has ever loved.

Takemichi Hanagaki leads a dead-end life in a run-down apartment while working part-time at a job for a younger manager who treats him like an idiot. Then one day, he learns that a girl he used to date during his hooligan days in middle school, Hinata Tachibana, and her brother, Naoto, have been murdered by the Kanto area’s most villainous hoodlums, Tokyo Manji. The very next day, Takemichi is standing on a train platform when he is suddenly pushed onto the tracks. But instead of dying, Takemichi is transported ten years into the past where he is reunited with Hinata’s younger brother, Naoto. “10 years from now, Hinata and you will be killed” he tells Naoto, thus altering the future. Hinata still doesn’t survive, but Naoto does, becoming a police detective. Returning to the present day, Takemichi recruits Naoto’s help in returning to the past to crush Tokyo Manji and save his Hinata’s life once and for all. All Takemichi needs to do to travel through time is to shake hands with Naoto in either the present or the past. But to save Hinata and break free from a life of running away, Takemichi must take on Kanto’s most powerful syndicate, the Tokyo Manji gang!